A CATALAN WEEKEND IN LONDON 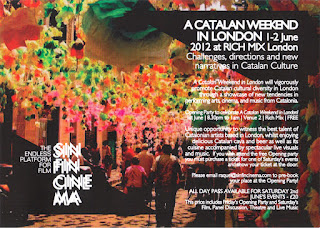 Here's the flyer of A CATALAN WEEKEND IN LONDON, the first instalment of a series of events exploring Spanish cultural identity and linguistic diversity curated by Sin Fin Cinema.

I am lucky to have been selected to represent Catalan new tendencies this weekend at Rich Mix. I will be exhibiting some of my architecture illustration and animation work together with established artists in the fields of photography, video and music, among others.

Catalonia is an autonomous region in the north-east of the Iberian Peninsula, roughly outlined by the Pyrenees, the Mediterranean Sea, and the regions of Aragon and Valencia which formerly were part of the Kingdom of Aragon. Its capital is Barcelona, the second largest city in Spain after Madrid and my hometown.

But that's in a very tiny nutshell. Come down to Rich Mix on the 1st and 2nd of June if you want to get a glimpse of the past, present and future of Catalonia. There's so much to know!

Check out the programme here. 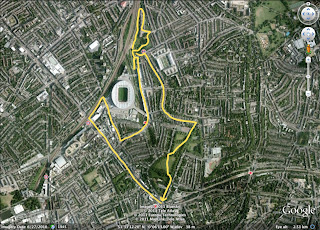 Considering we have chained a few days of hot summery weather I would like to resume the conversation about walks.

This is my second documented walk in London. It happened about a year ago at a time of self doubt and thoughts about the past. Starting at Highbury & Islington station with the idea of exploring Holloway road and fuelled by nostalgia I sought for places I had been to on my first visit around that area in autumn 2008.

Wandering about the Emirates Stadium I discovered Gillespie park, a very special little park which is also a nature reserve, right next to the train tracks. It stretches out from Arsenal station to Finsbury park and is divided in different areas including an Ecology centre, a little pond and a wind turbine.

The journey included some amateur train spotting at Drayton Park station, walking under a pedestrian only railway arch, and crossing the always comforting Highbury Fields finally ending up where it started.
Posted by Agustin No comments:

The Circle's on Fire! 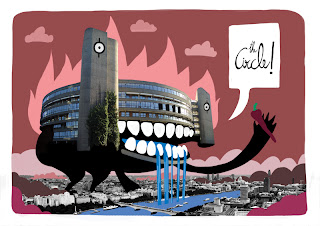 Last entry about the Barbican inspired works. This time it's the Circle, and he's hot! Yeah, because he's eaten a very spicy chilli and needs to drink water from the Thames to cool himself down. People at the Southbank must be freaking out to see such a massive creature looming over right across Waterloo bridge. Let's hope he won't have a nap anywhere near!

This set of works are done by combining photos and digital drawing.
Posted by Agustin No comments:

Birds in the Attic 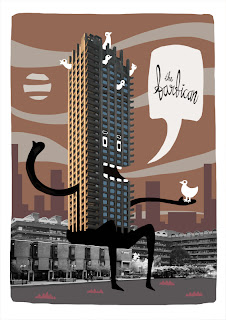 After chaos and destruction there comes the calm and where once was an aggressive building now there is good Shakespeare tower, happy and relaxed while singing to birds nested in the attic. To have birds in one's head is a Spanish saying referring to someone being dreamy, immature or mad.

This is the second instalment of building creatures inspired by The Barbican Estate and plays around with the idea of an environmentally friendly architecture. Quite literally.
Posted by Agustin No comments: 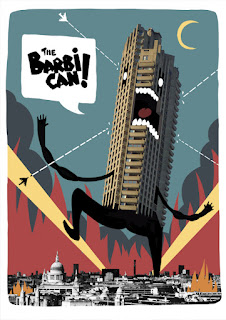 Back to drawing buildings. My friends know that for a long time I have wanted to do something on The Barbican, not quite finding out the way of being true to this fascinating building complex. After my first visit in autumn 2008, when I had recently arrived in London, it made me think of a sci-fi set up in which it was the only civilised remnant in a dystopian future London, like a sort of a Noah's ark of culture among devastation.

However, like the Transformers there's so much more than meets the eye, and so massive it is the Barbican is full of secrets, hidden spots and nooks, a bit of a metaphor of London itself. So after many times wandering around the estate in my spare time, I went back to basics and, drawing inspiration from early works, resumed with the idea of giant straight forward Modernist creatures, something in between monsters and robots wreaking havoc on London. No hidden meaning, just postmodernist fun.

THE BARBICAN! is one in a set of three postcards, with one of the towers portrayed as some sort of Brutalist Godzilla with a dangerous aversion to Classic architecture.
Posted by Agustin 1 comment: