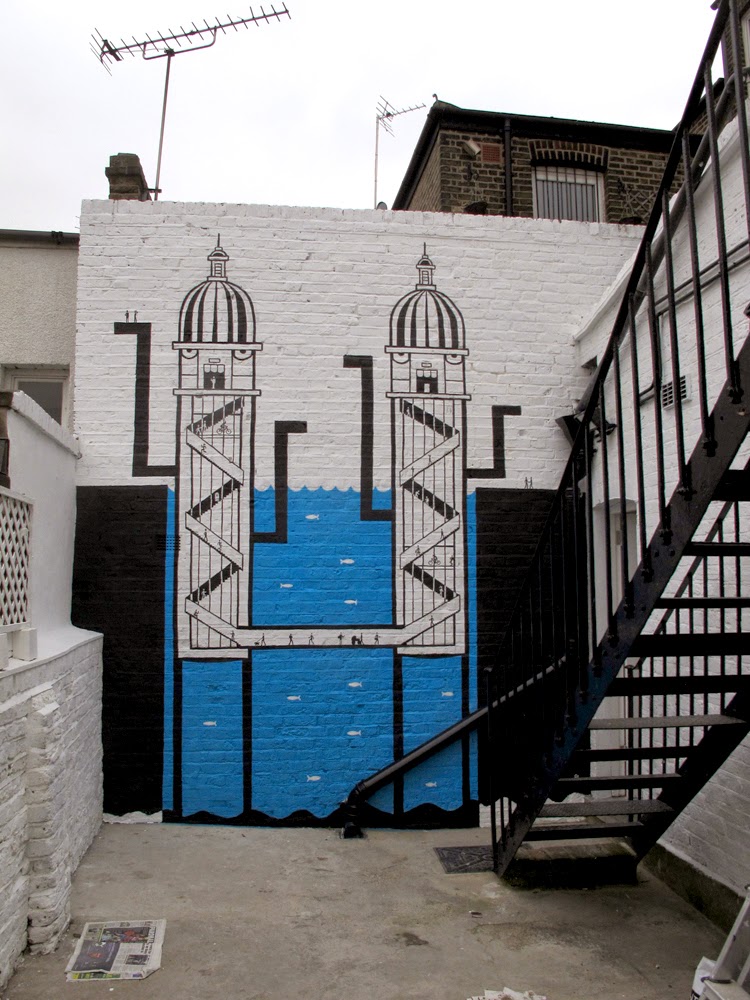 I was recently offered a wall in a courtyard of a house on Trafalgar Road in Greenwich, near Maze Hill station. At first the task seemed daunting since the last mural I painted was in 2010 and also because the wall is 5x3 meters approximately so rather big.


I was given carte blanche and for a while I toyed with various London landmarks. However, on the way down to my first meeting with the client I was cycling from East London down to Island Gardens to get across to Greenwich via the foot tunnel as I had done many times before. I've always found it fascinating, ever since I read the story of the Thames Tunnel, the first ever underwater tunnel and its engineers' ordeal. As I was exiting the dome at the other side I came up with the idea of these archaic creatures that guard an underground crossing hidden from public view. Similar to the underground labyrinth in Ursula K. Le Guin's The Tombs of Atuan.


By the time the Greenwich foot tunnel was given planning permission engineering had been perfected considerably so it's construction wasn't as dramatic as that of the Thames Tunnel. Completed in 1902 it allowed workers living south of the river to reach their workplaces in the London docks. Equipped with two large lifts and spiral staircases nowadays it still is a public highway and therefore opened 24 hours.


In this piece I wanted to focus on the usage of the tunnel and the idea of journeying through the innards of these huge ancient architectural beings. Will you be the same person when you get out? I did it with Aztec art and 8bit video game level designs in mind and it's hand painted with black and white masonry paint over blue spray paint.