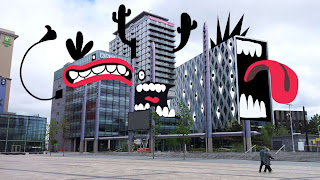 This is a collaboration I did a while ago for Soho-based animation studio Seed for a project proposal for MediaCityUK, a media village built on the banks of the Manchester Ship Canal that hosts organisations like BBC or ITV. 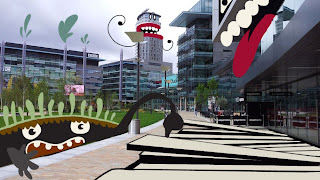 Originally part of the former Manchester Docks, MediaCityUK site Salford Quays became one of the largest urban regeneration projects in the UK after the dockyards closure in 1982. In a bold decentralisation move the BBC chose to relocate facilities from London to Northern England. This is only a small part of the ambitious Atlantic Gateway project that by 2030 sees Manchester and Liverpool linked in a strong 50 mile long trade corridor along the Ship Canal. 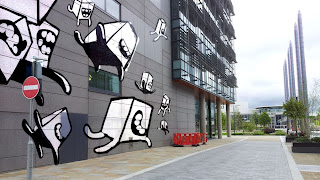 For this job I was asked to produce a few quick visualisations of the site brought to life by the 'spirit of the city', imaginative and dynamic. Working straight onto image references I was given, I came up with an array of 'architectural fauna' born out of urban elements and buildings imbued with personality. These were to inspire 2D animations that would be combined with CG in the final product. 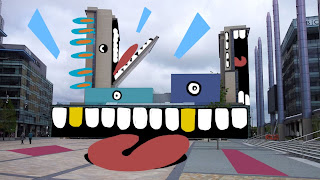