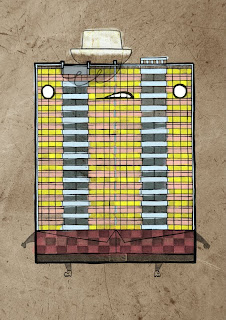 Hardly noticed when compared to the neighbouring Barbican Estate, it’s hard to imagine the importance of the Golden Lane Estate (1957) as one of the first social housing schemes that in a matter of years would change the shape of the English landscape for good.
Designed by architects’ firm Chamberlin, Powell and Bon to house residents of the Cripplegate area after devastation of the City of London in The Blitz during World War II, once finished it became a symbol of Post War recovery and a referent for council housing across England. The fact that King Arthur House – in the image – was for a brief period the tallest tower block in England shows the ambition of the project.
However it would soon be surpassed by the massive scale of the Barbican Estate, built by the same architects immediately afterwards in a regeneration process that took almost 20 years to complete. It’s fascinating we can still look at Golden Lane Estate, as a surviving urban microcosm utopia at a time of architectural disenchantment.
See King Arthur House here.
Golden Lane Estate is postcard five of six designed for Bauhaus: Art as Life competition at the Barbican Centre.
Posted by Agustin