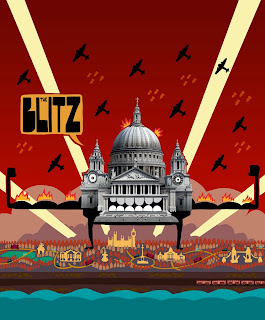 Recently there has been the Serco Prize for Illustration which is a yearly competition by the corporation that runs Transport for London. The winning illustration is displayed on a London Transport Museum poster which, for any city lover, is an honour for this is the oldest underground network in the world. Unfortunately, I didn't win but here's my submission.

This year's theme was London Stories. Participants where encouraged to produce a vision of London inspired by fictional or historical narratives set in London throughout its long history. In my case, the main inspiration is a fascinating photo taken during one of Nazi Germany bombings in World War II in December 1940, more commonly known as The Blitz. The image shows St Paul's Cathedral dome still standing behind a massive smoke column while London is ablaze.

Thanks to the lives of many firefighters, St Paul's survived more than 50 days of consecutive bombing and still stands today as a symbol of British endurance in a war that back then must have seemed impossible to win. The fear of a Nazi invasion of Britain was very likely at a time when much of the European continent was under the grip of fascist governments. London Underground played a major part in this story not only in guaranteeing commuters getting to work during the war but in setting up improvised air raid shelters in its underground stations.

Thus this illustration shows a busy London running under the shelter of St Paul's Cathedral encouraging its people to keep calm and carry on.

Further down there's the poster version I submitted to the competition without the explosions – to make it more palatable. Could all these bombs falling from the sky and the overall Dantesque look have put the jury off?