A City Fit For A God 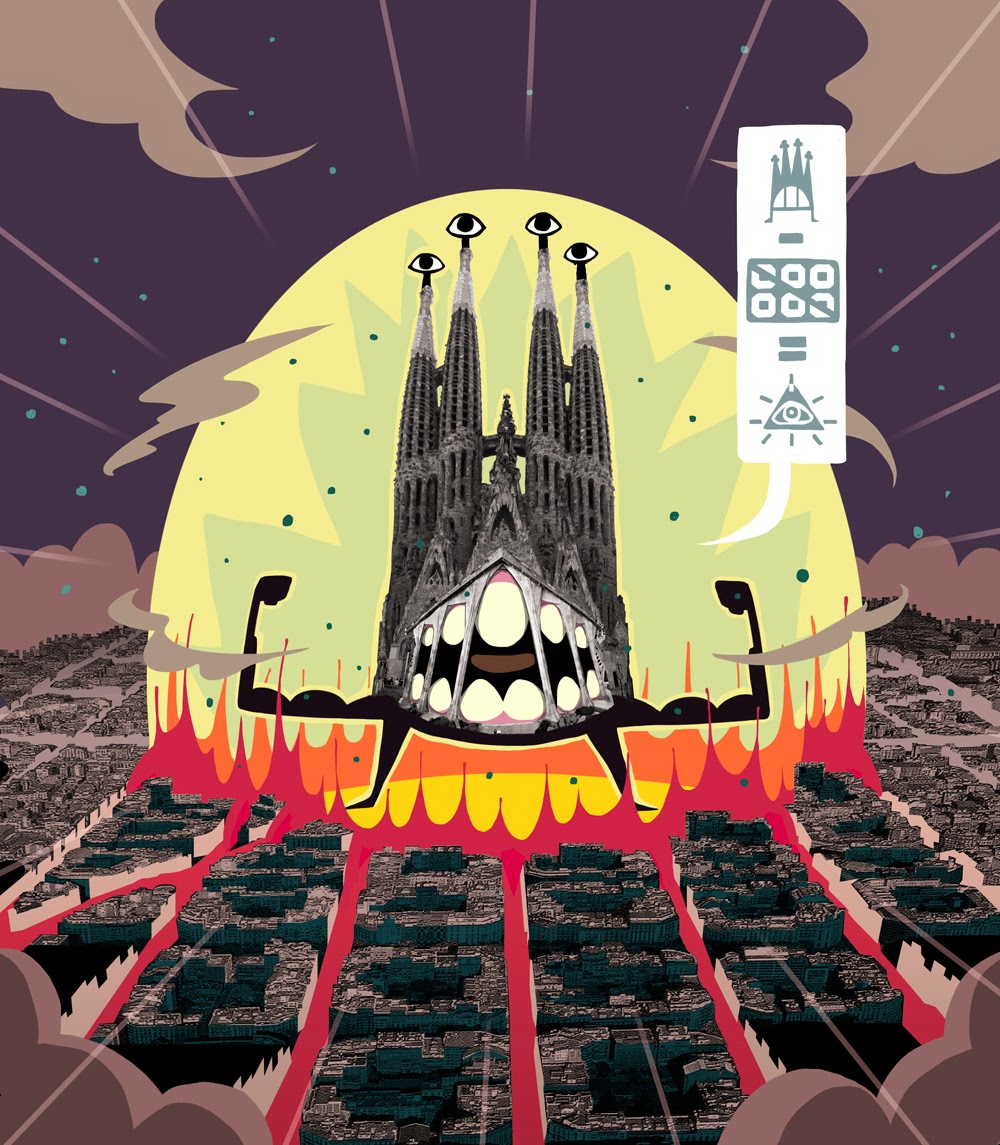 I have been recently contacted by Barcelona-based La Salle Institute of Technology and kindly offered to collaborate with Q9, their architecture webzine. So, on a more or less regular basis I'll be contributing with a satirical architecture illustration blog called 'Arquitectura Destructiva' (Destructive Architecture). To start with, an entry featuring Sagrada Familia Basilica making room by power blasting Barcelona's famous grid district l'Eixample (Extension). Not very subtle.

There's an ongoing controversy involving this building that has recently taken a new turn. As part of the original plan for his Roman Catholic masterpiece Gaudí had envisioned it at the centre of a star-shaped square. However that was back in 1882. Then he died and the city kept growing relentlessly swallowing the architect's star dream.

Now, Barcelona City Council has dusted off Gaudi's idea and revealed seven other new proposals for the redevelopment of the vicinity of Sagrada Familia of which only one does not consider the demolition of surrounding architecture; some of it built at the turn of the 20th century. The Nativity and Passion facades are facing green areas but what was originally intended as the main entrance to the temple, the yet unfinished Glory facade, is currently obscured by 13-storey blocks. Additionally, after the building became internationally known after the 92 Olympics, the upsurge of tourists have left the surrounding facilities dated.

Thus, the City Council deem it necessary to open up Spain's most visited landmark and design a monumental promenade that in its most ambitious proposal will see two blocks of houses being knocked down all the way down to Diagonal Avenue. Being by Barcelona's main traffic artery –it cuts the city in half along its 11 km length– the new layout will feature Sagrada Familia on a grandiose perspective fit for world status heritage. Hundreds of homes will be affected and neighbours relocated. No room for subtleties here either.

It's time to get to an agreement between the Sagrada Familia Foundation and Neighbour Association under the supervision of the City Council. The option of leaving the plan untouched is there.

When buildings become this iconic they become indirectly aggressive to their habitat. This one has the power of a God to get its well earned Lebensraum.

Article by Rowan Moore for The Guardian
Posted by Agustin